It's been six hours since I finished reading Vincent and Theo, and I still feel immersed in the story of the Van Gogh brothers, masterfully told by award-winning non-fiction author Deborah Heiligman. Simply put, Heiligman's book is a tour de force of narrative non-fiction, a page-turner based on years of painstaking research.

The story of the brothers' devotion to each other through a lifetime of challenges is fascinating -- and also often maddening, incredible, and sometimes even inexplicable. It makes great reading, no doubt about it. But it is Heiligman's delivery that has allowed Vincent and Theo to penetrate my heart and mind. As Heiligman describes it in an author's note at the book's conclusion: "In these pages, you meet Vincent and Theo as if you are walking through a museum show of their lives -- a collection of paintings, drawings, and sketches. Because Vincent van Gogh drew as much as he painted, and because his style evolved and changed over the years, I wrote in different styles, changing as it fit the topic, the time of Vincent's life, or the amount of knowledge we have.

"There are traditional pieces, sketches, impressions, scenes filled with great emotion, pictures where the emotion is in the white spaces, or in the details, pieces where it's all in the black line, others where the passion is in the color and the light." 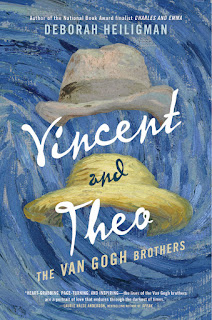 It's no wonder that Vincent and Theo is one of only two children's or teen books published so far this year (out of hundreds) that have received the highest accolades from reviewers -- six stars. Here's how that works: there are six professional review journals that cover children's and teen books, and Vincent and Theo has earned a starred review from each of them. The only other book to capture six stars at this point in 2017 is The Hate U Give, a stunning debut novel for teens by Angie Thomas. While their books couldn't be more different, both Thomas and Heiligman know how to make a story come alive for readers, whether it is a novel about police brutality or a non-fiction book about an unusual brotherly bond.

In June, Vincent and Theo won the 2017 Boston Globe-Horn Book Non-Fiction Award winner. And Heiligman has won a number of awards for her previous books. Charles and Emma, her book about Charles Darwin and his wife Emma, was a 2010 National Book Award finalist.

Before reading Vincent and Theo, I knew little about Vincent van Gogh as a person, and what I knew -- that he cut off his ear, apparently went mad, and ended up killing himself -- was negative. And yet -- oh, those paintings! The way he used color and line and paint to create art that just begs to be touched! (And, in fact, Heiligman writes at the end of the book that at the Van Gogh Museum in Amsterdam, "guards have to watch closely so visitors don't touch the paintings, so drawn are people to them. To the color, to the paint, to the raw emotion.")

What I didn't know until I read Vincent and Theo was that it's unlikely we would ever have had those paintings without Theo van Gogh. It was Theo's money, love and -- above all, his belief, over years and years, in his brother's talent -- that helped create Vincent van Gogh, the artist. It was Theo, the younger brother, who held a steady job and paid for his brother's paints and canvases. It was Theo who endured Vincent's moods and, eventually, dealt with his madness. And it was Theo who refused to give up his two-fold mission of offering advice to make Vincent the best artist he could be, while also working to persuade others to recognize his brother's genius. (And, at the book's conclusion, we learn of one other person -- Theo's wife Jo -- whose efforts ensured that Vincent's art gained lasting world-wide fame).

In Vincent and Theo, Heiligman details how the remarkable partnership between brothers was born in their early family life together and exemplified by a prayer that their minister father wrote and had his children memorize: "O Lord, join us intimately to one another and let our love for Thee make that bond ever stronger." Later, when the brothers were in their teens, there also was a seminal moment when they walked together in the rain and made a vow to always be there for each other. As Heiligman relates it, the brothers promised "always to be close, to keep the bond between them strong and intimate. They always will walk together. They will be more than brothers, more than friends. They will be companions in the search for meaning in life and meaning in art. Together they will achieve lives filled with a purpose. And they will, when needed, carry each other's parcels."

How keeping that promise to each other, through times of anger, financial anxiety, sorrow, sickness, and -- yes -- joy constitutes the crux of Heiligman's book. While she tells us about the world in which Vincent and Theo lived, especially the seismic changes that were shaking the art establishment as the Impressionist movement took hold, Heiligman keeps bringing us back to the brothers' extraordinary relationship.

My one issue with Vincent and Theo is that it is being marketed as a book for teens. Yes, it is a book for teens, who will be attracted to the riveting emotion of the brothers' story as well as Vincent's years-long effort to find his life's passion. Vincent was the very definition of a late bloomer. But Vincent and Theo also deserves to be read by adults, who will find this book well worth their time -- if only they can get over the idea that it is written just for teens. As a librarian, I often have to really work to convince adults that great teen non-fiction is every bit as carefully-researched and well-written as any adult non-fiction book.

I'll end this review by quoting Heiligman's conclusion to her author's note; it's a fitting way to wrap up this look at Vincent and Theo: "Vincent van Gogh referred to many of his works as studies, not finished, not final...(Yet) Vincent's art draws you to him, whether or not he himself thought it was finished.

"Vincent's life was not finished when it ended, either. But it was a work of art. So was Theo's. And their relationship was a masterpiece."

Posted by Karen MacPherson at 7:49 PM