For a variety of reasons, it's been way too long since I wrote in this blog. One of my New Year's resolutions for 2019 is to get back to writing regular blog posts. With that in mind, I want to finally write up a wonderful interview I had some months ago with Laura Geringer Bass. If you're a fan of children's books, her name may be familiar to you, as she was a long-time children's book editor who ended up with her own imprint at HarperCollins. She's also an accomplished author of books for kids and teens, and published a new children's novel in 2018, The Girl With More Than One Heart. It's a book that is close to Laura's heart, and took many years to write, but the resulting novel is a compassionate and insightful exploration of grief and resilience as the main character deals with the sudden death of her beloved father. 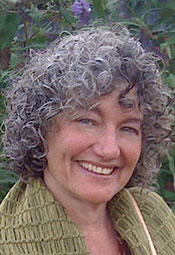 Before diving into Laura's many years of work on The Girl With More Than One Heart, let's take a look at her fascinating path through the world of children's literature. Laura's first publishing job was with HarperCollins, where she was hired by the legendary editor Charlotte Zolotow. While Laura was thrilled to get the editing job, she also made it clear that she also wanted to continue her work as a writer. "At the very first interview, I mentioned that I was working on a novel," Laura remembered. "She (Charlotte) gave me one of her very big smiles and said, 'I hope when you're ready, you'll show it to me.'" Because Charlotte herself was the author of about 75 books for children, "she was very empathetic to a person who wanted to both edit and write.... She was a mentor, she encouraged me."

When Charlotte retired in 1991, Laura was given her own imprint, Laura Geringer Books, and she published many noteworthy books over the years until her retirement in 2008. Throughout those years, however, Laura also was writing her own books. As she puts it: "There was always the writing." At this point, Laura has written over 20 books for kids and teens, including a teen fantasy, Sign of the Qin, an ALA Best Book shortlisted for the Printz Award, and Myth Men,  a series of graphic novels that CBS adapted into an animated show. In fact, Laura got off to a running start in 1984 with her first published book, A Three Hat Day. "I had the good luck to have (Caldecott Medalist) Arnold Lobel illustrate it," Laura said. "Arnold read it and loved it. He said, 'But I might make the main character a raccoon,' and I said, 'Anything you want to do. ' Instead, he made Mr. Potter a little man who looked a lot like Arnold." A Three Hat Day was chosen as an ALA Notable Book, spotlighted as a Top Ten featured selection on LeVar Burton's Reading Rainbow, and is still in print.

After many years where she had to divide her time between editing and writing, Laura decided eight years ago to focus totally on writing. She runs writing workshops for several non-profit groups, including teens at risk in the NYC Prison Writes program, as well as with high school girls who participate in Girls Write Now.  Laura also spends a chunk of her time going to schools, especially in the Harlem area, working with kids interested in writing. Still, Laura carefully carves out time for her own writing, and when she retired from publishing in 2008, she joined a writer's group run by children's author Lore Segal. "I was working on The Girl With More Than One Heart way back then.... Lore was amazing -- so kind -- and she read my 38 chapters many, many times," Laura said.

In The Girl With More Than One Heart, Laura tells the story of eighth grader Briana, who has always felt closer to her father than her mother, especially since the birth of her little brother Aaron, who has special needs and seems to take all of their mother's attention. So Briana's world is turned inside out when her father dies suddenly of a heart attack. Not only is Briana dealing with her own grief amid the social challenges of middle school, she also must cope with her emotionally-shattered mother, who spends her days in bed and relies on Briana to take much of the responsibility for Aaron.  Shortly after her father's death, however, Briana suddenly feels as if she has grown a second heart through which she hears her father's voice. a voice that eventually moves her towards a new relationship with both her mother and brother.

Reviewing the book, Kirkus noted: "There are a lot of different topics covered in this book, but they never feel like too much, and they all fit into the scope of the plot. Bass tackles some heavy issues—having a sibling with a disability, losing a parent suddenly and at a young age, and coping with a parent's depression—but she manages to do it with grace and empathy. Readers will see Briana's understanding of her brother shift as she starts to really see him as opposed to what she feels he has cost her. This book is full of heartache and rare smiles, but that is because it is achingly real."

And Publishers Weekly said: "The narrative moves seamlessly between past and present and incorporates Greek myths, Briana’s “fractured fairy tales,” and Grandpa Ben’s tall tales, highlighting the power of storytelling to foster healing and strengthen relationships." 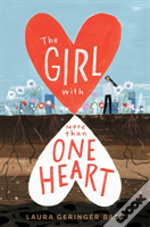 Heart --Laura's shorthand for the book -- pulls together many strands from Laura's own life. One major character, Grandpa Ben, is based on Laura's father. "My father was a terrific storyteller. He was funny and he loved these long, shaggy dog stories -- what he called Jewish jokes -- that actually included material from every mythology and culture. He used to tell my son these stories. My son is on the spectrum and had a lot of trouble adjusting to the world. He had epic tantrums. My dad was able to turn his meltdowns into something much more joyous."

Laura taped her father telling stories, and when he died she wanted to write about him, and about his storytelling. "So the book kind of started with me transcribing the stories as my dad told them. I wanted to capture his cadence and ability to wryly deliver a line." Laura showed the initial manuscript to Tamar Brazis, now an editor at Abrams, who -- in a neat twist -- had started in children's publishing years before as Laura's editorial assistant. After reading it, Tamar suggested that Laura turn the manuscript from a series of stories into a novel. "I thought she had a great idea -- I just didn't know how to do it," Laura said. "At the time, I was writing fantasy -- Chinese mythology. So I put it aside for a bit. But I had to just keep going back to it, and at one point, I found myself writing about a 13-year-old girl who had lost her dad. That was me; I was very close to that feeling."

Then Laura had the idea of a "dad heart, which became kind of the engine of the book. And a little bit of the mystery of the story, as the heart says things to her." But the idea of the heart was "the hardest thing to work out," Laura said. "At first, there were seven hearts. They were characters in a way but that wasn't sustainable. It was kind of weird at first... Then, as I was writing it, it just became clear it all would come out. I know that Brianna was working her way back to her mother." With that in mind, Laura then focused on the idea of the "dad heart" that would help Brianna and her mom rekindle their emotional bond..

As for Briana, "She's no angel, and she wants to be less of an angel than she is.... I think she's a young and pretty innocent 13-year-old whose head is filled with stories and writing." Even as she deals with her father's death, Briana's life goes on, "she suddenly has a crush, suddenly her friends are different." The Girl With More Than One Heart went through many, many revisions on the road to publication. Laura asked someone to take a picture of her standing next to a pile of revised manuscripts -- the stack is taller than Laura, who is six feet in socks. "I wanted that photo encourage other writers who are going through the same thing. You want it to be the best it can be, and you must have a crazy amount of patience and the ability to go back and back and get it just right."

It was worth all the revisions, Laura said. "I am very happy with it. I'm very proud of it and I love holding it in my hands." Now, Laura is hard at work on her next book, a middle grade fantasy, a book "which has been marinating in my head for a while." 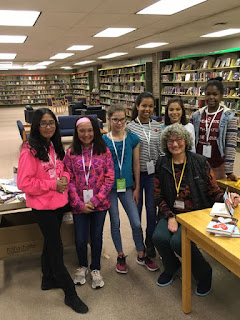 Overall, Laura feels very fortunate to have been both an editor and a writer (and a teacher even earlier in her career). As an editor, "I got to work with some amazing authors and artists, I really enjoyed that career. But I always wanted to write, so I feel really lucky to have all my time now to devote to the writing and also the the teaching. It feels like all these strands in my life have come together."

END NOTES: Huge thanks to Laura for her remarkable patience with me in getting this blogpost done. I have been greatly inspired by your writing and your work with young writers. Thanks also to Tracey Mason Daniels of Media Masters for setting up the interview with Laura.

Posted by Karen MacPherson at 4:07 PM