In the world of children's and teen literature, there are six major professional journals (Booklist, The Bulletin of the Center for Children's Books, The Horn Book, Kirkus Reviews, Publishers Weekly, and School Library Journal) that regularly publish reviews. These journals "star" books they consider particularly distinguished. Winning a star from one or even two of these journals is a big deal; winning a star from EACH of these journals is an astounding accomplishment.

Each year, however, there are a handful of children's and teen books that actually do earn six stars. Thanks to the herculean efforts of Elizabeth Bluemle, who blogs at ShelfTalker, we know that in 2014, just three books won six stars. (Bluemle tracks these things in regular updates called "The Stars So Far;" the latest installment was published in late September). Given the fact that there are several thousand books published each year for children & teens, these three books truly are the best of the best, at least as far as these top review journals are concerned.

This top-rated trio consists of -- Drumroll, please! Now add some trumpets! -- The Family Romanov: Murder, Rebellion & the Fall of Imperial Russia, by Candace Fleming; This One Summer, a graphic novel written by Mariko Tamaki and illustrated by her cousin, Jillian Tamaki; and Brown Girl Dreaming, a memoir by Jacqueline Woodson. In addition to earning six stars, Brown Girl Dreaming won the National Book Award for Young People's Literature. 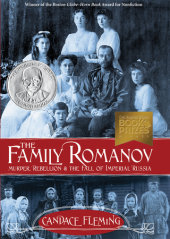 Each of these books is, obviously, outstanding. They also are amazingly different. Two are non-fiction -- The Family Romanov and Brown Girl Dreaming -- but they take starkly different approaches. In The Family Romanov (Schwartz & Wade/Random House, $18.99, ages 10 up),  Fleming has woven a massive amount of research into a gripping tale spotlighting the stark contrast between the sumptuous lives of Russia's last imperial family and the people they ruled, who lived in abject poverty. Fleming's text is firmly based in history, but it reads like a thriller, as we follow the Romanovs towards their doom and the rest of Russia towards chaos. Real-life characters, led by the mystic Rasputin, keep readers turning the pages; you can get a good taste of the book from this book trailer. Numerous black and white photographs further help set the scene, as do the first-person narratives that Fleming includes in each chapter. Brown Girl Dreaming (Nancy Paulsen Books/Penguin, $16.99, ages 8 up) also is non-fiction, but in this case, author Woodson is writing about her own life. It's an unusual autobiography, however, as she tells her story of growing up as a black American in the 196's in a series of prose poems. It's a bold -- and risky -- choice, as books told in prose poems are notoriously hard to "sell" to readers, kids or adults; just ask any children's librarian. Yet Woodson's book is so engagingly written, and her story is so powerfully told, that numerous young readers who have reluctantly picked up Brown Girl Dreaming on my recommendation have returned to the library raving about it. Slowly, it is building the audience it deserves at my library as more young readers realize what a story Woodson has to tell. Here's Woodson herself reading from the book; she also is the reader for the audiobook, which we've just ordered for my library.

Unfortunately, Woodson's triumph in winning the National Book Award for Brown Girl Dreaming was marred by racism when author Daniel Handler, who hosted the awards program, joked about the fact that Woodson is allergic to watermelon. Handler's racist joke, even more hurtful to Woodson because of a friendship between them, sparked a firestorm of protest. Handler was forced to apologize, and he donated a large sum of money to the We Need Diverse Books effort as a way to atone for his comments. Meanwhile Woodson, a class act, took the high road in a piece she published in The New York Times titled "The Pain of the Watermelon Joke." Woodson may have the last word in any case, as Brown Girl Dreaming is widely regarded as a top contender for the 2015 Newbery Medal. If Woodson's book does win, it will be an especially sweet moment because so few non-fiction books have ever won the Newbery.

For something totally different, take a look at the third book to win six stars this year, This One Summer (First Second/Macmillan, $17.99, ages 12 up). Featuring gorgeously evocative artwork by Jillian Tamaki, the book written by Mariko Tamaki focuses on a pivotal summer for a girl named Rose. On the cusp of adolescence, Rose finds herself restless and unhappy in the beach town she's traveled to each summer with her parents. It's always been a refuge for the family; now her parents are fighting with each other over her mother's inability to bear another child. Rose, meanwhile, finds herself changing as well. While still best friends with her beach buddy Windy, there's sometimes a new strangeness between them, as Rose finds herself with a crush on an older teen boy and struggles to cope with the tension in her own family.

In a spare text, Mariko Tamaki perfectly captures the way the world shifts as kids enter adolescence, while "stunning" is truly to only word for Jillian Tamaki's artwork, which conveys so much in just a few lines, and while using an extremely limited violet-toned palette. This page from Macmillan, the publisher, gives you a sense of the book.

So there you have it -- three books, six stars -- stellar!

Posted by Karen MacPherson at 10:41 AM