Back to the Blog -- After a "Bucket List" Experience

Serving on the 2016 Caldecott Committee was truly a "bucket list" experience. But it also meant that I haven't been able to post on this blog for months because of the rule against posting on social media anything remotely connected to books eligible for the 2016 Caldecott Medal. In the last six months. I've been immersed in Caldecott-eligible books and had little time for anything else. Hence, no blog posts in the last six months! Now, finally, I can get back to regular blogging, and my first post is -- naturally -- a look back at my Caldecott experience.

For some reason, it feels right to begin towards the end of this once-in-a-lifetime experience. The process culminated two weeks ago, when my committee met in Boston for two long (into the evening) days of the most invigorating book discussions in which I have ever participated. It was truly "the book discussion of a lifetime," as we had been told to expect. Sarah Bean Thompson, one of my committee colleagues, perfectly captured the experience in a recent post on the Association for Library Service to Children (ALSC) blog.


(Note: the video works even though the picture doesn't show up!)

Then came the fun of calling the winners, early on the morning on Monday, Jan. 11. Making "The Call" is a time of high emotion -- both for the winners, and for we committee members. Our winning illustrator, Sophie Blackall, burst into sobs when our chair, Rachel Payne of the Brooklyn Public Library, told her the good news. Sophie had to promise to keep the news secret (except from her spouse and editor) until it was announced at the Youth Media Awards (YMAs) a couple of hours later. Interestingly, Sophie and the children's book illustrators with whom she shares studio space have an annual tradition of watching the YMAs together. Sophie somehow managed to keep her secret from her studiomates -- including 2014 Caldecott Medalist Brian Floca -- until it was announced. Brian then captured Sophie's emotions in a photo, and put it on Twitter: 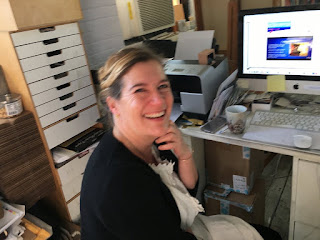 But we committee members weren't done quite yet. After calling Sophie and our other winners, we took our seats at the Youth Media Awards (YMA) program. (If you missed it, check out this archived version). It was a truly electric moment for my committee when the hundreds of librarians packed into the Boston Convention Center room for the YMA program erupted in cheers as ALSC President Andrew Medlar, the program emcee, said: “And the winner of the 2016 Randolph Caldecott Medal for most distinguished American picture book for children is….. Sophie Blackall for Finding Winnie: The True Story of the World’s Most Famous Bear.”


As the crowd applauded, my fellow 2016 Caldecott Committee members and I turned to each other with huge smiles. We had done it! After a year of reading, and re-reading (and re-reading…..) hundreds of eligible books, and after two days of intense and deeply meaningful discussions, our work was finally completed.

Throughout the process of choosing the 2016 Caldecott Medal winner, we had been humbled and awed by the fact that we were charged with choosing a book that would be bought by hundreds of libraries and thousands of parents. We knew that the winning illustrator would garner both fame and fortune, as books chosen for the Caldecott Medal virtually never go out of print. There’s a good reason why the Caldecott Medal (and the Newbery Medal, given annually to the “most distinguished contribution to American literature for children”) are often called “the Oscars of the children’s book world.”

My involvement with the Caldecott process actually began in 2013, when I was asked to run for the 2016 Caldecott Committee. There are 15 members of the committee; seven are elected and eight, including the chairperson, are appointed by the leaders of the Association for Library Service to Children (ALSC), a division of the American Library Association.

The elections were held in the spring of 2014, and I won a spot on the committee. But it wasn’t until January 2015 that our real work began. Over the course of 2015, each committee member received hundreds of books from publishers. Contrary to popular understanding of the Caldecott Medal as an award for picture books written for preschoolers, books for children ages birth through 14 are eligible. That wide age meant we received – and read --board books, illustrated non-fiction books, graphic novels and – yes – picture books for both young children and elementary-age kids.

Our job was to evaluate these books according to the Caldecott Medal criteria. Each month, we sent Rachel, our chair, a list of suggested books, ones that we found interesting and thought our colleagues should read.Then, in October, things got really serious. Each committee member has seven nominations – three made in October, and two each in November and December. With so many great books published in 2015, it was excruciating for us to narrow our choices, but we had to. These nominated books then became our “finalists” – the only ones we could discuss when we gathered in Boston to choose our winner. All other books were off the table.

Now, a note about confidentiality: all of our monthly suggestions, all of our nominated books – including how many books were nominated, since people could end up nominating the same book – and all of our discussions in Boston, will forever remain secret. Even our discussion room was designated as “secured,” meaning only committee members could enter. In addition, we never discussed the nominated books, even in email or on the phone, until our deliberations began at 8 a.m. on Friday, Jan. 8. As you can imagine, we were all quite eager to finally discuss books that had consumed so many of our waking hours for a year. 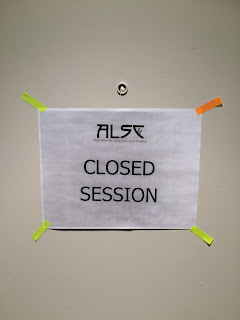 In terms of Caldecott history, the 2016 Caldecott Medal was the 25th won by a woman (some women have won multiple times) since the award was first given in 1938; 47 medals have been won by men, while three Caldecott Medals have been won by husband and wife teams (Diane and Leo Dillon won twice, and Alice and Martin Provensen won once). (Note: I did these calculations based on the information available on the ALSC Caldecott Medal page.) I have to say that it's been particularly fun to read Sophie's reactions to winning the Caldecott Medal. Publishers Weekly talked up her "champagne and donuts" celebration, while NPR noted that Sophie's favorite book as a child was Winnie-the-Pooh, and so she was particularly delighted to have been asked to illustrated Finding Winnie. And the inimitable John Schumacher, better known as Mr. Schu, perfectly captured the joy and drama of winning a Caldecott Medal in his interview with Sophie on his Watch.Connect.Read blog.

Our group of Caldecott Honor books is quite diverse. Our Honor illustrators include three African-American artists (Collier, Holmes and Robinson), a debut illustrator (Holmes), a Caldecott Medalist (Henkes, who won the Medal in 2005 for Kitten’s First Full Moon.), and a previous Caldecott Honor winner (Collier,  who has won three Caldecott Honors for Martin's Big Words, Rosa, and Dave the Potter). And, in a bonus for us, most of our books received awards from other awards committees, underlining their excellence. Perhaps the biggest and best surprise was the fact that one of our Caldecott Honor books,  Last Stop on Market Street, also was awarded the 2016 Newbery Medal for the lyrical and poignant text by author Matt de la Pena. It is only the second time that a picture book has won the Newbery Medal.

Meanwhile, some folks have loved our choices, while others debate them. That goes with the territory. Since we committee members can't discuss our decision-making process, we can't respond very specifically. But I can tell you that we did our very best, and that our decisions were based -- as they must be -- on the Caldecott criteria (which are now burned in my brain forever!). Susan Kusel, who served on the 2015 Caldecott Committee, wrote about the experience in this thoughtful blog post. And Susan references another well-written piece about the issue, written a couple of years ago by my Caldecott colleague Sarah Bean Thompson after she served on the Michael Printz Award committee.

While our committee’s official work is now done, we now are charged with promoting our winners, using them in programs and talking them up with kids, parents and teachers. Rachel, our chair, started the process with her deftly written guest post for the Calling Caldecott blog on The Horn Book website, in which she describes some of the reasons we chose our award winners. I particularly love Rachel's call to action at the conclusion. Noting that some folks wish we had chosen other books, Rachel concludes: "It was a magical experience for our committee to put gold and silver award seals on these books. Work some magic for the books you love."

Our committee will gather one last time at the American Library Association’s conference in June to hear the acceptance speeches by the winners. And, as a usable souvenir of our extraordinary experience, we’ll always have our committee t-shirt  (created in homage to the beloved Boston-based, 1942 Caldecott Medal winning book Make Way For Ducklings):  “Make Way for Caldecott 2016!”


Posted by Karen MacPherson at 5:48 PM